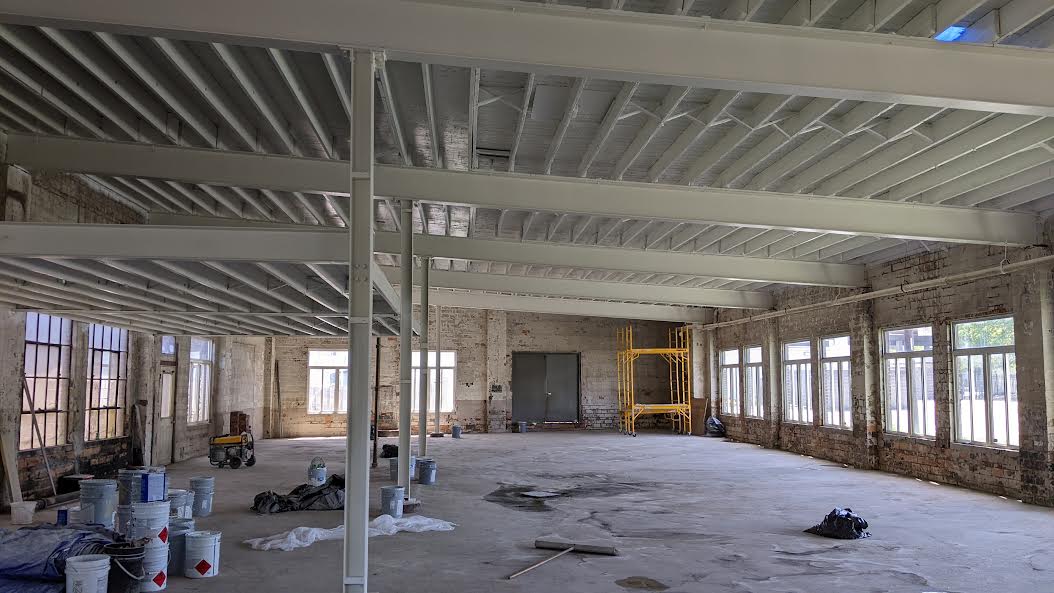 Joseph Klare walks me through the empty building, gutted of all the features that made it an auto shop, and explains how it will soon become a thriving craft cidery in the heart of Norwood.

Northwood Cider Co. will be  the first and only dedicated hard cider company in Greater Cincinnati when it opens in the summer of 2022. Klare’s enthusiastic descriptions fill the empty space for me: the storage areas up top, where the cider will be fermented in the back, and the bar running along the west side of the building.

“We’ll have a cold storage room where we’ll have all of our finished product and some of our stuff that hasn’t been fermented yet. And then there’ll just be a very small chain divider between the front house and back house,” Klare said. “We want people to be able to see… how it’s made and where it’s made. This’ll be a production area, so people can’t just wander back, but we will be doing tours and “How Cider’s Made” classes and things like that. We’re not going to be a huge operation, obviously, but we can hopefully get some information out to people that are curious about the process and how we’re trying to use as local ingredients as possible.”

Klare and his wife Rohan Krehbiel partnered with couple Darrin Wilson and Keyu Yan to bring their love of cider to greater Cincinnati with the aim of being inclusive and inviting to all the people of Norwood. Klare met Wilson at a brewery when grabbing drinks and dinner with a mutual friend. They discovered both had a passion for home brewing cider. Klare and his partner Krehbiel, had found craft cidery through a trip to Ireland in college despite not knowing each other at the time. After the two got married home brewing became a popular hobby, especially wines and ciders due to Klare’s gluten intolerance. Wilson, on the other hand, also discovered cider while abroad and living in England. He had an existing interest in home brewing and brought home to his wife, Keyu Yan, the art of cider brewing. Wilson previously owned a brewery, but sold the business when he and his wife moved. It seemed like the perfect encounter when the two met, and the next morning Wilson messaged Klare to ask about his thoughts on starting up a brewery together. Klare describes that they “brought [their] spouses into the mix and everyone hit it off as friends”.

Greater Cincinnati’s market didn’t have breweries specialized in craft cider despite its growing popularity in the United States following the popularity of craft beer. Searching for the right location within the Interstate 275 loop, Klare and Wilson, who both work in economic and community development in their day jobs, knew they wanted a place near both residential and business areas.

“We were seeking locations where we could function as a neighborhood living room for residents, a great starting point for visitors to explore a community, and a community that had a great deal of passion and activism to make itself more vibrant,” Klare said. “Tom Perry, who previously worked for the City of Norwood, happened to be one of Darrin’s students and suggested the pair take a look at Norwood. A group organized by Norwood Together showed them around town and pointed out a few potential buildings and explained all of the great things happening in Norwood. They spotted the old Norwood Brake building, right next to Victory Park and across from Surrey Square and Kroger, and a few months later were under contract.”

The Northwood Cidery will feature classic cider flavors as well as experimental flavors that are crafted on a rotating basis, so there’s a drink for everyone.

“The idea is that it’s going to become a flexible space so that we can hold community events. You could call us and reserve a table for some 20 people for your birthday party. You can bring your kids in and sit in the lounge and watch a basketball game with them. Or, you know, when Off Pike Market’s happening outside, and you’re out shopping. Maybe your husband or your son or your family is coming with you and you want to sit down for a while. [You want to] take a load off and grab a drink and people can keep shopping,” Klare said. “So we’re trying to make it a space that’s flexible, but accommodating and one that’s comfortable visually.”

The cidery plans to have five to six year round ciders on draft as well as five to six ciders that rotate seasonally based on what fresh ingredients are available at the time. In regards to the diversity of what the cidery/taproom has to offer Klare says this about the drinks available, which will range from various ciders, a few beers, and potentially a few wines,

The Northwood Cidery and Tap House plans to open in the summer of 2022 and will be located in the old Norwood Brake building at 2075 Mills Ave.